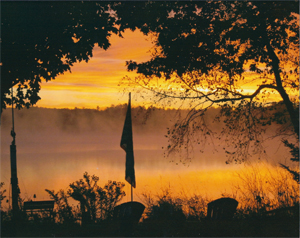 Said to be created from Glaciers thousands of years ago, there were once three glacially formed lakes with interconnecting streams. The Chippewa Indians were the first tribes on the lake. The lake was named “Little Bear” after the Tribal Chief Little Bear. There are many interpretations and spellings in the Indian language for the name of “Little Bear” one being “Baungay Macqua” and the other is “Bungay Mokwa Siagon”. On the plat map of 1852 there is a small lake called “Makwa” Lake. One is to wonder if the name was miss-spelled (as many were back in that day) and it might just be “Little Bear” Lake as on the plat map of 1855. The main Indian Chief that lived on the lake at that time was Chief Nay-Na-Ong-Gay-Bee, who signed the treaties of 1842 & 1854 at La Pointe, Wisconsin. He was tomahawked by the Sioux Indians in the fall of 1855 while hunting near Prairie Farm. The last tribal Chief on Long Lake before 1880 was Chief Ni-Chance.

In 1883 Mr. O.H. Ingram (banker/financier) from Eau Claire founded the Rice Lake Lumber Company. He purchased timber land around Long Lake from the Knapp Stout Company and built the first dam at the South end, thus raising the lake 8 feet. It is said that at this time all three lakes were then connected to form one and the name was changed from “Little Bear” to “Long Lake”.

The lake was primarily logged by Rice Lake Lumber Company and Knapp Stout & Company through the early 1900’s. During the late 1800 through the early 1900’s, post offices, schools, churches and resorts were established throughout the area. By the early 1900’s Long Lake was growing with new settlers and summer cottagers buying up land from the lumber companies. It was quickly becoming the “destination” place to be. Logging ended sometime prior to 1906.

To date many of the fine establishments have been sold or no longer exist. Those that remain continue to be one of the reasons Long Lake is still the top destination place to visit in Washburn County Wisconsin!

(The above information is my own brief synopsis of information gathered from collections of various recollections housed at the Washburn County Historical Society.)

Check this Historical Section for changing featured stories and information about history on Long Lake. 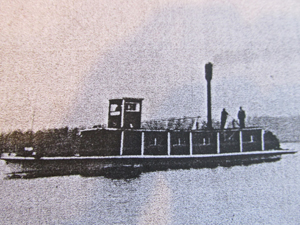 Did you know that Long Lake was home to two working steamships and one steamboat?

The first steamship was the N. B. Noble named after the first superintendents of the Rice Lake Lumber Company. It was 75’ in length with an 18’ beam. It had two 6 horse marine steam engines with 24” propellers. It had a galley and bunks enough for a crew of seven. It was said that the crew at various times consisted of: Sever Soholt; Captain, Joe Baker; Mate, Christ Lee; Fireman, Walter Kykes; Engineer, Andy Knutson, Paul Fournier, Al Kirkeby, Oscar Hovey, and Simon Berg; Cook. The ship towed logs from below the narrows to the south end of the lake with 500,000 to one million feet of boom logs.

The second steamship was called the “Fanny Ingram” named after the wife of O.H. Ingram president of the Rice Lake Lumber Company. This ship had a crew of 6 and a cook. This boat was said to have been used to pull the boom down to the dam pond.

The steamboat called the “Nikanas” was a supply boat also owned by the Rice Lake Lumber company. It was named after an Indian sub-chief of the Chippewa’s.

(Information was gathered from collections of other’s recollections housed at the Washburn County Historical Society.)